Clubs throughout BC sent their Men (19) and Women (15) champion pairs team to the two green facility of the Victoria Lawn Bowling Club for the third annual Champion of Champions event. The teams were composed of an experienced bowler plus a bowler with 3 or less seasons on the greens. Many went through qualification tourneys at their home club to participate in this Tournament. 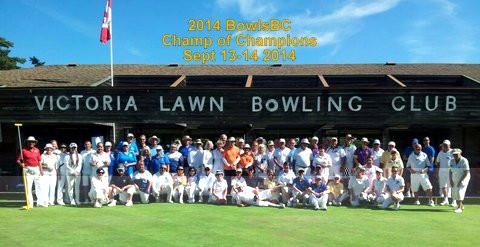 The two-day event started Saturday with four 10-end games under a warm sunny sky. At the end of the day the top eight men’s and women’s teams were selected to play in the medal rounds and the next eight were invited back to participate in a consolation tourney.

Sunday morning was also full of sun and promise. 14-end games were now being played. By 3pm the lineup for the medal rounds was determined and bowlers were anxious to determine who will be the Champion of Champions for 2014.

Turner and Lambert check out a head.

In the Men’s Gold/Silver game we had Mann Park LBC (Stan Turner & Rick Lambert) defeated Cowichan LBC (Gord Fall & Roy Wilkinson). This was Turner’s third appearance in the final of this event and his second win, defending the title he won last year.

The Bronze meda game between Richmond LBC (Helen Auyeung & Linda Ng) vs Lois Goodeve & Cindy Garvin of Stanley Park LBC. This game went to an extra end with Richmond being the victor.

BowlsBC would like to thank all the members of Victoria LBC for hosting this event. It would not have been a success without all the enthusiasm the members gave to make this a tournament memorable for many of the participants.

This BowlsBC pilot program was initiated to introduce newer bowlers to a higher skills level through competition and to meet bowlers from other regions on an equal playing field. This was the third year of a three year proposal and BowlsBC Board will now assess the continuation of this program.

Report and Photos by Keith Terlson